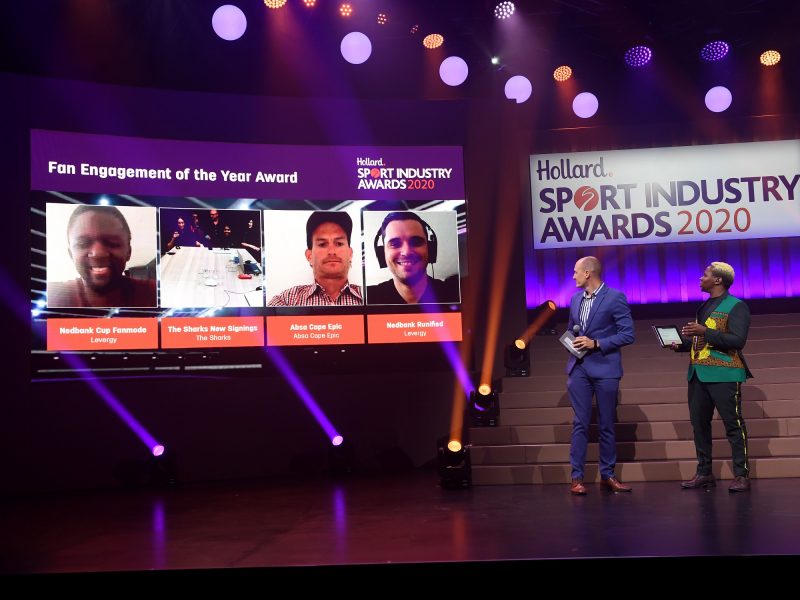 Iconic mountain bike race the Absa Cape Epic has been celebrating being awarded the ‘Fan Engagement Award’ at the 2020 Hollard Sport Industry Awards.

Covid-19 putting a stop to all public participation sports events did not detract from the creativity behind some of the country’s best sports campaigns in 2020, as recognised by the Hollard Sport Industry Awards held virtually recently.

In fact, it’s arguable that the impact of the pandemic pushed the industry’s creative minds to come up with concepts and roll out campaigns that even greater highlighted the creative talents within the South African sports industry.

The Absa Cape Epic is ‘The Untamed African Mountain Bike Race’ and has, over the past 16 years, become a mountain bike rite of passage for those passionate about the sport. Roughly half of the riders who enter the race are international and they travel from across the world to test their mettle on the Western Cape’s most gruelling, yet spectacular, trails. It is also the only eight-day mountain bike stage race classed as hors catégorie by the Union Cycliste Internationale (UCI) and has become a definite highlight on the global professional racing calendar.

“Thanks to the worldwide media coverage and being the most televised mountain bike race in the world, the Absa Cape Epic is the race that every amateur wants to participate in and every professional wants to win. This offers amateur riders a unique opportunity to rub shoulders with the best local and international mountain bikers, while they all attempt to overcome each stage’s challenges and hardships,” says Sarah Harrop, Absa Cape Epic’s Marketing Manager.

But, obviously, that counted for nothing when the Covid-19 pandemic hit and the Absa Cape Epic was not alone in having to pivot and head online for an effective solution and to keep their event alive.

Pivoting this physical sporting event to a digital one helped to somewhat soften the blow for riders who had been preparing to push themselves to their absolute limits in this year’s race, but the execution had to be first-class, and it was, with the Absa Cape Epic recognised at the Hollard Sport Industry Awards with this year’s Biogen Fan Engagement Award.

“2020 was an incredibly challenging year for all events companies and cancelling the Absa Cape Epic was something we never thought we would have to do; the success of our campaign at the Hollard Sport Industry Awards was an amazingly positive two-fold success in a year many would wish to forget,” says Absa Cape Epic Sponsorship Account Manager, Gareth Harrington. “It allowed our team to have some fun with diving into a new virtual realm and delivering a campaign that was enjoyable, engaging and featured the competitive spirit that our riders seek out at every Absa Cape Epic. We appreciate the patience and support that riders have shown this year and we hope the pros and amateurs alike loved the Zwift activations we put in place. In the future, I believe virtual rights will become a permanent fixture in sponsorships, so we are glad to have set the bar high in this space.”

Harrington says that the award was also recognition for the team who worked tirelessly on the campaign, but more importantly, it repaid the faith and support that the event sponsors have shown during these trying times.

“We can’t even begin to express our gratitude to our sponsors, especially Absa, for sticking with us throughout 2020’s ups and downs,” he says.

Biogen was this year’s category sponsor of the Fan Award, and it’s a brand that has since establishment in 2004 been extensively involved in sport. Initially focusing primarily on the fitness and endurance sectors, Biogen has since gone on to work with sports teams, athletes and organizations spanning across most of the big disciplines.

“Now with both support of, and representation in, running, swimming, cycling, rugby, cricket, equestrian, mixed martial arts, as well as the broader health and fitness space, we have always invested in multiple sporting codes, with a core focus on self-improvement, and being the best version of one’s self,” says Brandon Fairweather, General Manager Biogen.

This year’s Hollard Sport Industry Awards also included a full-scale virtual conference, looking at some of the most topical issues in the global sports business, with contributions from some of the industry’s most prominent players.