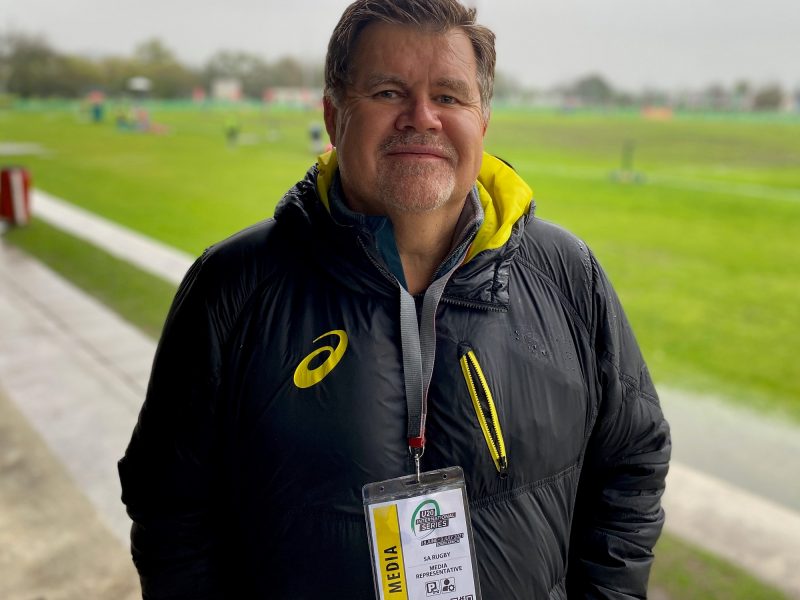 He’s a former SABC TV News Sports Editor and was the presenter on stage when Francois Pienaar lifted the 1995 Rugby World Cup, but he’s been out on his own for over 20 years now and knows a little about what makes for compelling sports content.

Q: What services does TV Sports & News Productions offer?
A: When I left the SABC my main aim was to provide a broadcast news syndication service to clients. In other words, to film events on behalf of sponsors and organisations, and to make it available to mainly broadcast platforms, especially news. Over and above this, we also produced highlights programmes, both commissioned and placement, to further ensure maximum exposure for the client. The idea was – and still remains – to maximise exposure for both the client and the specific sport.

Q: How different is that from when you first set out on your own in 2000?
A: At the start, satellite costs were prohibitive and made it very difficult to cover particularly overseas tours by teams. The advancement in technology gave us the opportunity to provide the service at a much more affordable cost. This meant we could send high-quality video files via the internet at an absolute fraction of satellite costs. In addition, the advent of social media meant we had to evolve by providing additional content for use on digital platforms. As an example, when I covered the first overseas Springbok tour in 1992 our equipment, including two edit machines, weighed almost 150 kilograms, then you had to travel to a local TV station to send the video out via a pre-booked satellite window. Now we do the same work, much faster and more affordable, with higher quality equipment that barely weighs 20 kilograms. It also means we can send a single-person crew with teams and syndicate broadcast news and digital content on a regular basis, and of course a great deal more cost-effectively. There is of course also streaming and live productions, which now provide an additional platform to clients who can’t necessarily afford a conventional broadcast production.

Q: What is the work you’re most proud of, since setting up TV Sports & News Productions?
A: We have been blessed with great opportunities to travel with entities like Banyana Banyana and the Springbok Sevens team. Through this I believe we have made a significant contribution by increasing the profile of these teams and individuals. Being able to syndicate stories on these teams on a daily basis from all over the world and get them placed on news bulletins has helped a great deal in leveraging sponsorships for sponsors and boosting the exposure of teams who otherwise would be under the radar. More recently, we did a three-part series on the Blitzboks which was broadcast on Supersport, called #BestofUs. This was straight after the first extended period of lockdown and I was very proud of the final product. Prior to that, a documentary on Banyana Banyana before the 2019 Women’s World Cup, as well as programmes on mountain biking, road running, golf, trail running, the Sasol Solar Challenge and wheelchair basketball reminded me why I am hooked on the industry. We are also striving to increase the level of our live streaming productions and I am happy with the progress we are making.

Q: What impact has Covid-19 had on your business?
A: I can try and sugar-coat it, but it has been devastating, like it has been for everyone out there. We have had probably 20 major productions and events cancelled and with the new lockdown last week even more productions have been called off. The main issue is that these have been lost forever – there are not going to be two events next time and you will be lucky if the event happens at all again. On the positive side, it has allowed us to sit down and refine our streaming solutions.

Q: What do you view as the biggest impact of Covid-19 on the way sport in general is run, consumed, commercialised etc?
A: It is probably too early to say as it is a very fluid situation that changes on a daily basis, but obviously the absence of spectators and subsequent loss in earnings by sponsors will have a major impact on sponsorships and leveraging. The fact that it seems that the pandemic will still be with us for a long time also means it is difficult for anyone to plan in advance and right now a lot of events even planned for the second half of the year are being canned or are up in the air.

Q: How has the broadcasting and content landscape changed, as a result of Covid-19?
A: The mere fact that events have not been staged of course has meant that very little has actually be done in terms of productions etc, but we have seen the industry quickly adapt do doing interviews and creating content via Zoom, Teams etc. The editorial content has been great in most instances, but for obvious reasons the technical standards have varied. For a time I think this worked and might still be relevant in the short-term, but I would like to believe that we will soon return to some sort of normality, where content of a high technical quality will return to all platforms. Of course, it also has seen many new players in the streaming market and highlighted the need and value of this.

HAVE YOU READ?: Getting to Know: Rendani Ramovha

Q: What’s your view on the emergence of over-the-top (OTT) streaming players and their entrance into the sports rights market?
A: It is fantastic, particularly for content producers, as it offers so many more opportunities. Not only that, but sports bodies who normally would have struggled to get air time on mainstream platforms can now sell their product to the OTT market and of course attract sponsors and grow their sport.

Q: Switching tack slightly – 26 years on, what are your recollections of being on stage and interviewing Francois Pienaar when he lifted the 1995 Rugby World Cup trophy?
A: I can’t believe it has been 26 years since that day. Francois ’s response to my question I think is etched in South African sports history, so it is nice to have been part of that day. There are so many good memories from that day, from doing the Good Morning South Africa show live that morning from Ellis Park with Dorianne Berry, to the excitement as the crowd got in, the plane flying over, just about everything, including the half-time cigarette I had – the only time I ever smoked! I also remember knowing immediately that Joel’s drop goal was over as I watched him turn around. The euphoria at the final whistle, doing interviews in the dressing room, and then watching people celebrate, was just magic.

Q: Is that your favourite memory as a TV sports news journalist/presenter, and if so, what else stands out from your SABC career in news and sport?
A: That is certainly a great memory and one of many I have been blessed with. So many opportunities came my way and I am so grateful for that. They include covering South Africa’s first ever appearance at a Cricket World cup in 1992 and then being asked to go on the tour to the West Indies straight after that. Then there was watching Michael Johnson run the world record in the 200m in Atlanta in 1996 and the 400m in Seville in 1999, doing pitch-side interviews after the 2007 World Cup in France, and most recently, enjoying all the trials and tribulations of the Blitzboks. Just so many memories that it is hard to pick, but I really feel very privileged.

Q: What do you make of the latest dispute between the SABC and SuperSport, with regards the broadcast of the upcoming Lions series?
A: Legends and role models are made on Lions tours. The first ever test match I attended was as an 11-year-boy in 1974 when the Boks drew with the Lions at Ellis Park. To this day I can still name almost every member of that Lions squad and the same goes for the epic matches in 2009. It illustrates the very challenging landscape of professional sport, which has become dependent on rights from most subscription-based broadcasters, who must get a return on their investment, as opposed to making the product available to a wider audience on free-to-air platforms. I hope it is solved amicably.