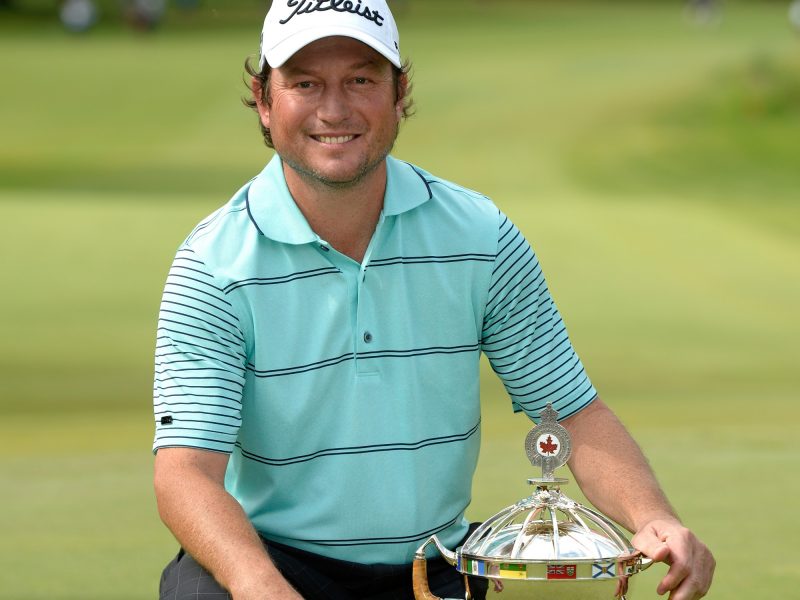 Private equity investment in sport is currently a hot topic, but isn’t a ‘semi-retired’ South African golfer living in the United States taking a stake in a rugby franchise back home a bit of a stretch? Tim Clark doesn’t think so.

Clark has spent the past 25 years living in the US, having left the small south coast town of Umkomaas in 1996 to pursue college golf at North Carolina State.

That was the springboard to turning professional in 1998, as the diminutive Clark set about building a golf career heavy on guts and determination, and a reliance on quality ball striking, as opposed to prodigious length off the tee or a red-hot short game.

The end result – 11 professional wins, with the highlights undoubtedly the 2010 Players Championship and two South African Open titles (2002 and 2005), to go with Scottish Open and Australian Open victories, and the 2014 Canadian Open title, his last professional victory.

Throw in three Presidents Cup appearances and a highest world ranking of 14 in 2006, and it’s a career many pros can only dream of, albeit one that saw Clark constantly dogged by injury. It’s the reason he hasn’t played for roughly five years, with his latest ailment, a debilitating back injury, preventing him from doing more than chipping and putting at his local club.

But, it’s also a career that has brought Clark $23.9 million (R350m) in on-course earnings – arguably the reason why he probably doesn’t sit in Scottsdale, Arizona, his home for nearly 20 years, wondering where his next pay check will come from, or how to pay his bills.

So, it perhaps wasn’t a surprise to hear him mention to this writer on ‘The Long and the Short of It’ golf podcast, that he’d recently become an investor in the Sharks rugby franchise, off the back of the MVM Holdings deal in January.

The US investment firm took a 51% stake in the franchise, with the Sharks of the belief that their new majority partner‚ with its vast network across continents‚ industries and sporting codes, will help broaden their global footprint.

Interestingly, the consortium is led by Amanzimtoti-born and raised Marco Masotti, now a high-powered New York attorney, with it pure coincidence that he and Clark grew up roughly 25 kilometres from each other, and a few years apart.

“I never knew Marco in his Toti days, and he’s obviously in New York now,” says Clark. “I was just thrilled that they let me be part of their little group, because I think they are going to really try and do some great things with that franchise. Hopefully, it drives rugby and sport in South Africa, as a whole, in the right direction.”

So, if Masotti wasn’t Clark’s way into the deal, just how did it come about?

“Purely by chance,” he says. “A good friend of mine, Ian Kennedy, who played for Western Province and Louisiana State University, put me in touch with his old roommate at LSU, Jan Pieterse, who was involved in the Sharks deal. He put me in touch with Marco, who told me about their plans for a group of South African expats living in the States undergoing the process of acquiring a percentage of the Sharks. He was kind enough to let me become a part of the group.”

Along with Masotti‚ the other significant South African member of the consortium is Vincent Mai, currently Chairman and CEO at The Cranemere Group Limited, an international holding company for businesses in the United States and Europe.

He’s a Grey High School old boy and has funded the ‘Vincent Mai Bursary Scheme’ for worthy recipients from lesser privileged backgrounds to attend the school in Port Elizabeth, with Springbok captain – and now Sharks player…..spot the connection – Siya Kolisi the first recipient.

But, there are other heavy-hitters in the consortium, including Marc Lasry (Founder of Avenue Capital and owner of the NBA’s Milwaukee Bucks team)‚ Doug Cifu (CEO of Virtu Financial and owner of the NHL’s Florida Panthers team)‚ Robert Haswell (Founding Partner of Dominus Capital)‚ Dominic Silvester (CEO of Enstar Group), and Michael Yormark (President of Roc Nation Sports International).

Clark, though, makes it clear that he’s very much a minority investor.

“I’m just a small drop in the ocean, but it’s going to keep me interested,” he says. “I am a very small investor, so I won’t be involved in any business decisions or anything like that, but I will certainly be available to promote the Sharks or help out in any way they need.”

Clark won’t reveal how much he’s invested, but rather points to his long-standing history with the Sharks as his reason for putting in what he has.

“I have always been a Sharks fan, having grown up in Umkomaas,” he says. “Then, since moving to the States in 1996, I’ve always kept up with rugby in South Africa – it was a nice way to stay connected and having this opportunity to be a part of a group looking to develop rugby in South Africa was very exciting. Plus, I felt like it would certainly make watching the games from now on a lot more intense!”

Clark turns 46 in December, so his adolescence coincided with the emergence of the Sharks as a South African rugby powerhouse in the early-1990s, with the 1990 Currie Cup victory over the then Northern Transvaal the catalyst for a period of domination.

“My favourite Sharks memory is definitely when they won the Currie Cup in 1992,” says Clark. “That’s because of how jubilant everyone in KwaZulu-Natal was about that victory and what a great bunch of characters were on that team.”

Now he’s looking forward to seeing what the MVM Holdings investment can do for his beloved Sharks, with the franchise having already undergone significant transformation under young CEO and former player Eduard Coetzee.

With a doctorate in ‘Inclusive Business Model Innovation’, Coetzee has made it clear that he’s on a journey to transform the Sharks, telling the Sport Industry Awards in 2020 that the franchise is trying to change the narrative around transformation, from “a punitive to a progressive statement”. He believes that is key to both building social cohesion, as well as fostering the type of culture he has in mind for the organisation.

There’s no doubt that Coetzee has already made strides in transforming the Sharks playing roster, successfully bringing through some of the province’s most promising black talent, to the extent that the starting 15 for the Rainbow Cup SA opener against the Stormers featured 10 players of colour.

That would, seemingly, fit nicely with what Clark’s understanding of the consortium’s approach to its Sharks investment is, if one reads between the lines.

“MVM Holdings are all about giving back and developing and enriching the lives of people back in South Africa,” says Clark. “They have been doing this for many years through many other avenues before undertaking this passion project of taking the Sharks to new heights as a South African and worldwide franchise. In my opinion, their impact is going to be extremely positive, as it pertains to the development of younger players and growing the game of rugby among all the people of South Africa. This, in turn, can impact all the South African franchises and create a snowball effect, whereby the game of rugby and other sports can grow and flourish.”

For now, he’s happy to sit back and monitor how both his team and his investment perform.

You would think that a bit of ‘skin in the game’ puts a different complexion on things, but with Clark you get the sense that he’s just a fan, he has the money, and a pretty cool opportunity to take a small stake in his favourite team popped up – and he grabbed it.

As he says: “It’s going to give me some interest. I’ve always been a Sharks guy.”