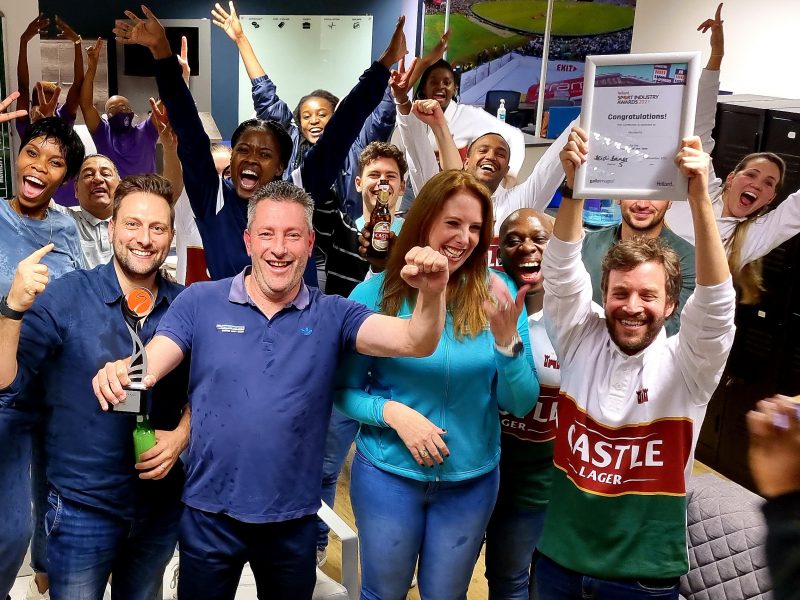 Mscsports is celebrating walking away with the Agency of the Year gong at this year’s Hollard Sport Industry Awards.

Founded as a sports memorabilia company in 2000, Mscsports has grown and evolved into a full-service sports and entertainment agency, with three key verticals:

2. Rights – partnering with rights-holders to secure strategic sponsors that are the perfect fit for maximum impact.

According to the agency, they “view ourselves as an extension of our clients’ marketing team, providing turn-key, insights-driven solutions for maximum impact.”

Mscsports is now celebrating what has proved to be an excellent past year, during which time it defied the various lockdowns South Africa experienced to pick up a host of new clients, including stationery and office supplies brand Bidvest Waltons and payment solutions brand Ozow, whilst also expanding its portfolio with Discovery to include Vitality and Insure.

In total, Mscsports secured 18 new clients, whilst eight clients renewed their broadcast agreements, with some, such as Ram Hand-to-Hand Couriers, Sportingbet and Discovery, expanding their broadcast media portfolios. Additionally, new broadcast deals were secured for Ozow, along with strategic consulting work undertaken for Dimension Data and Super Six Racing.

All of this against a backdrop of uncertainty and change, with Mscsports having to endure an initial loss of 50% of its retainer revenue streams, due to the suspension of live sport and entertainment. Nonetheless, it managed to pivot its service offerings in response to the changes in consumption patterns, with an accelerated move towards virtual and hybrid events.

Mscsports also managed to retain 100% of its staff, despite the major impact of Covid-19 on the overall sports and economic climate.

From an account point of view, the biggest Mscsports victory during this period was, arguably, winning the pitch to become Castle Lager’s sponsorship agency, which transformed its 2020/2021 – a year that has obviously seen incredible upheaval.

“It’s been an unprecedented challenge for us as an agency and for the industry in general,” says Grant McEwan, Head of Strategy. “But we’ve faced it head-on and are incredibly privileged to have come through it as a team, working with some of the biggest brands in some of the most important moments in sport over the last year. As we’ve seen in the past, sport provides hope and relief to South Africans and we’re proud to have played a small part in bringing that to life at a time when we needed it the most.”

HAVE YOU ALSO READ?: Mscsports Named Agency of the Year at Hollard Sport Industry Awards

Not only did Mscsports pick up the Castle Lager account, but it also went on to implement a campaign for the beer brand that would go on to be named Campaign of the Year and claim the Event or Competition Sponsorship of the Year award at the 2021 Hollard Sport Industry Awards.

That was for its Castle Lager #InOurBlood campaign, with Mscsports using local fans’ collective passion for rugby and Castle’s sponsorship of the British & Irish Lions Series as a unique opportunity to build a campaign for South Africans to come together and unite behind the Springboks.

– a multi-platform approach to maximise reach and engagement

– Castle developing a commemorative can and jersey, which were made available online and via competitions on their social media platforms

– cook along masterclass with Bertus Basson

“Our work on the award-winning Castle Lions Series and #InOurBlood campaign was obviously a major highlight,” says Neil Jankelowitz, Chief Executive Officer. “We have also been fortunate to have worked on a number of campaigns to deliver impact for the likes of Engen, Discovery, Prudential and Ram Hand-to-Hand Couriers, amongst others, over the last year.”

With all of this in mind, what does Jankelowitz believe was key to Mscsports being awarded Agency of the Year?

“The resilience of our team and the support and belief from our amazing clients,” he says. “The athletes, brands and rights-holders with whom we’re privileged to work have ultimately provided us with the platform on which to create, execute and leverage their sponsorships, and their unwavering trust and commitment has been paramount to our combined success.”

“The pandemic has pushed us all out of the proverbial comfort zone – having to quickly pivot to virtual and hybrid activations – but what could have been seen as a major challenge has also provided an enormous amount of opportunity, in terms of creativity and execution, and we’re excited to see where that leads us in 2022,” says Jankelowitz.

Well, 2022 could well prove to be unchartered territory, with the 2021 Hollard Sport Industry Awards taking place on the same day that the discovery in South Africa of a new variant of Covid-19 was announced.

What that means for the South African sports industry, at this early stage, is anyone’s guess.

But, if 2020 and 2021 have taught us anything, it’s that South Africa’s brands, agencies – like Mscsports – and rights-holders are well-equipped to adapt, and that more innovation and creativity can be expected over the coming 12 months.