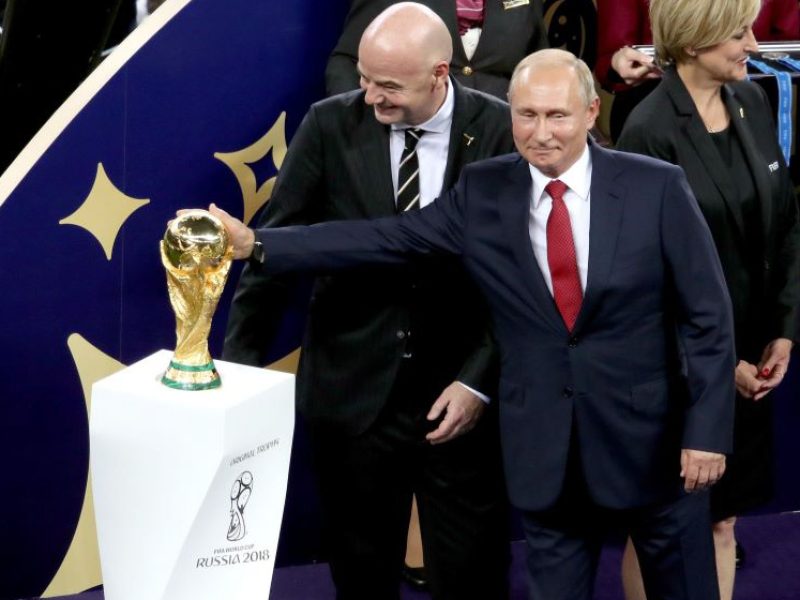 Opinion: Should Sport Exert its Influence in the Face of Political Adversity?

Following Russia’s recent invasion of Ukraine, sport has been pulled into a political landscape. Head of PR at Mongoose, Amelie Hawkins, explores how the sport industry has influenced wider society in the past and how it will now react to Russia’s actions.

It was once said by Kofi Annan, former Secretary General of the United Nations, that “the World Cup makes us at the UN green with envy”.

He was referring to the fact that the FIFA World Cup could unify nations with a shared passion. Take, as an example, the impact of England’s comparative success at the 2018 FIFA World Cup Russia in uniting a politically divided nation. In July 2018, against the backdrop of Brexit and the divisive EU referendum two years previously, England reached the semi-finals of the FIFA World Cup. As millions of jubilant fans spilled onto the streets, a ‘football fever’ engulfed the nation, temporarily abating the political rift.

Annan believes that “at its best [sport] can bring people together, no matter what their origin, background, religious beliefs or economic status”. Sport can maintain a level of impartiality that enables it to transcend divisive aspects of society and provide a neutral platform that resonates with cultures across the globe.

There is much debate as to whether political neutrality in leading sport spectacles has been achieved. The ability to peacefully bring together nations from across the globe is obvious, but sport is often caught up in stories of discrimination and politicisation too. Over the past century, sport has been plagued with protests, boycotts and even terrorism. So, while the desire may be to maintain a strict code of detachment from political, religious and racial contentions, the fanfare that follows international sport makes this difficult.

As Vladimir Putin continues his full-scale invasion of Ukraine by Russian troops, the actions of governments, sporting bodies, teams and brands is being closely monitored. The sport industry has been largely unified in its dismay towards Russia and moves have been made to detach the country from respective competitions and sponsorship opportunities.

FIFA and UEFA were unified in banning Russia from competing in any of their competitions, also stripping the city of St. Petersburg as the host of this year’s Champions League final. Similarly, Russian sponsors within football have been punished, with German side Schalke removing Gazprom as their shirt sponsor, and Manchester United terminating their sponsorship deal with Russia’s national airline, Aeroflot.

Meanwhile, the International Gymnastics Federation and the International Olympic Committee have banned Russian and Belarusian athletes from participating in competitions and the latter has stripped Putin of his Olympic Order award. This demonstrates that sport cannot always be considered politically neutral. It can attempt to exert a form of soft political power to generate pressure and ultimately change.

The prominence of purpose-driven brands in the sporting landscape is a driving factor in the growing need for rights-holders to make a ‘stand’ on political issues. There is a need for sport to have a greater voice on political issues. Rights-holders within sports, such as governing bodies or teams, are reliant on money from sponsorship deals to help grow the sport, while brands want to leverage the larger audiences the sports can provide to increase their customer base. Consumers, however, are increasingly loyal to brands that display and promote a true purpose behind their partnerships. This quote from Raphael Bemporad, Founding Partner of branding and social impact consultancy BBMG, aptly describes the significance of brand purpose as, “the intersection of a company’s authentic reason for being and the unmet human needs that it can uniquely fulfil in the marketplace and the world.”

HAVE YOU ALSO READ?: Opinion: Making the Most of Athlete Appearances

Brand purpose to consumers has a clear significance. A recent article in the Drum highlighted that 59% of consumers would boycott brands that fail to address the climate emergency. This statistic demonstrates just how important it is for brands, and their sports partners, to have a voice when it comes to political issues.

Sport has always provided an avenue for individuals to achieve change and to express political opinion, as they have often been used as a mechanism of soft power. One of the most poignant examples is the USA – China table tennis tour of 1971, known as the ‘ping-pong diplomacy’. Following a meeting between the global super-powers at the World Table Tennis Championships held in Japan, the USA Table Tennis team embarked on friendly sporting contest to Beijing. They became the first American delegation to visit the nation’s capital in over 20 years. It is widely accepted that it was this breakthrough in relations that led to President Nixon’s official visit to China in 1972 and the beginning of an era of peace building.

What we are witnessing from the sports world in response to Russia’s invasion is a unified attempt from rights-holders and governing bodies to help initiate peace. As we watch on, largely feeling helpless, it is the brands, sponsors and sporting bodies that are making decisive action in the face of war. Silence in the face of political adversity is no longer an acceptable action.