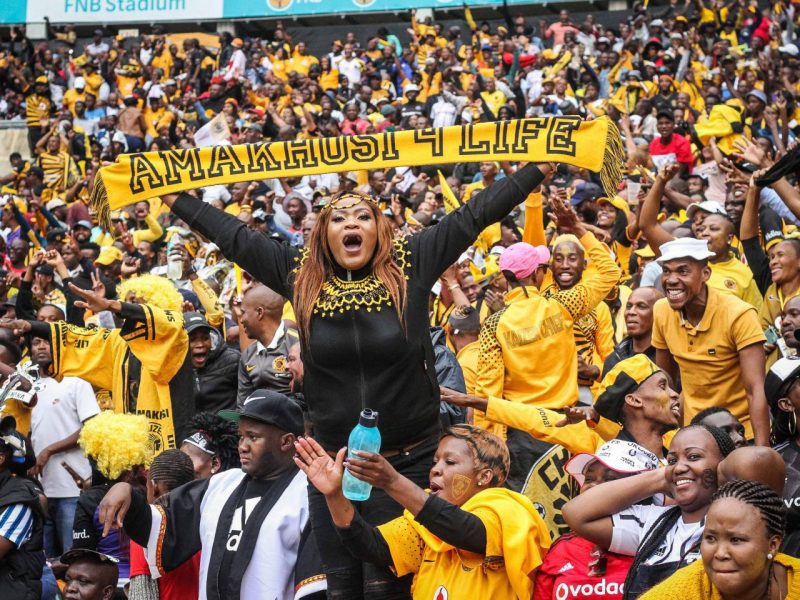 Opinion – Soweto Derby Not the Same Without Fans

With the PSL ruling that there will be no fans at the latest Soweto Derby, I was reminded of a piece I wrote over a decade ago, describing my Derby experience, and why this showpiece South African sports event just won’t be the same until stadiums are able to be filled, once again.

It starts as a steady hum, punctuated by the odd shrill sound from a “vuvuzela”, a trumpet-like device unique to Africa, as hordes of Kaizer Chiefs and Orlando Pirates fans make their way down the street towards the Coca Cola Park stadium (now Emirates Airline Park – Ed).

It builds to a more consistent buzz and chatter, the closer you get to the ground, as colourful groups, bedecked in either the black and white of Pirates or the gold and black of Chiefs, come together as one, wearing team shirts, caps, scarves or even the more outlandish “makaraba” (township slang for “safety hat”……..) on their heads.

But, it’s only once you enter the stadium and take up your position in the stands that you get an appreciation for what is nothing short of a cacophony of sound, from approximately 70 000 different sources, as the excitement builds to the start of what every Chiefs and Pirates fan will tell you is, without exception, the highlight of any season.

This is the Soweto Derby.

Rated consistently among the top five football derbies in the world, for it’s passion, history and colour, the Soweto Derby pits South Africa’s most high-profile and well-supported “glamour clubs” against each other in a fixture that stirs the emotions and which is more about one-upmanship than the quality of the football.

The intense rivalry has it’s roots in the breakaway of former Pirates player Kaizer Motaung to form a new professional club in South Africa in 1970, following his return from a spell in the North American Soccer League. Motaung, now the club chairman, took with him a few disgruntled Pirates players and there the seeds were sown for a rivalry that would trump all in South African football.

But, whilst it’s a bitter rivalry, there isn’t that latent aggression that accompanies many of the great football derbies around the world. In fact, it’s probably one of the few where rival fans are able to sit side-by-side in the stands and watch their teams go at each other for 90 minutes, without the desire to inflict some sort of injury on an opposing fan.

So, there I was, in my Chiefs shirt, sitting shoulder-to-shoulder with passionate Pirates fans and cheering on my team, without fear of reprisal or grievous bodily harm! In fact, that’s something else that makes football watching in South Africa unique. Yes, my ticket said “West Upper Stand” and that’s where I took up my place. But, no, I wouldn’t be sitting in seat 24, row D, because that’s not how it works in South African football. In fact, I was just thankful I arrived early enough to find a seat, as teeming masses of Pirates fans crowded the exits and walkways, eager for the opportunity to prey on the poor soul who was the unfortunate owner of a weak bladder and had no-one to keep his seat for him!

(It’s certainly something that South African officials will have to get right by June 2010, as the rest of the football world arrives to take up their designated seats, as it’s done in most countries around the world.)

There have been violent incidents over the years and the seating is divided to accommodate Chiefs fans on one side and Pirates fans on the other, but, if you happen to find yourself in a Chiefs jumper on the Pirates side of the stadium, you’re more likely to get a vocal ribbing, than something sharp between ribs three and four!

Whilst violence and football derbies often go hand-in-hand, and all the great ones around the world have sad stories from the past, the Soweto Derby’s darkest day, ironically, saw fans of both clubs come together in grief, following the most tragic event in South African sporting history. In scenes that mirrored the Hillsborough Disaster of 1989, 43 Chiefs and Pirates fans were killed on the 11th of April, 2001, when a stampede saw fans of both clubs crushed to death. Perhaps, then, it’s quite  poignant that the derby continues to be played at the stadium formerly known as Ellis Park, as Chiefs and Pirates supporters remember those who lost their lives eight years ago. It’s also a timely reminder that there are more important things in life than the result of one’s football team and fans of both teams carry with them the memory of the tragic events of 2001.

Chiefs fans pride themselves on the “Love and Peace” incorporated into the club’s slogan and indeed, the club’s most well-known and visible supporter, Saddam Maake, with his oversized Chiefs glasses and an adoring entourage, makes a plea for a peaceful afternoon of football, along with the obligatory Chiefs victory!

But, Chiefs are up against it. They go into the match third in the local Premiership standings, a point behind their rivals and seven adrift of pace-setters SuperSport United, with just a couple of games remaining. Victory for either of the Soweto giants is a must, if the defending league champions are to be prevented from making it consecutive Premiership titles.

Pirates are one of the form teams in the league and they outplay their rivals in the first half, much to the delight of the baying Buccaneers faithful. Affectionately known as “The Ghost”, Pirates fans are easily recognisable in anything black and white and for the “skull-and-crossbones” sign they make with their hands when taunted by an opposing Chiefs fan. Only some poor finishing stands between Pirates and a significant goal advantage and The Ghost can sense it, as they dance and chant in unison, sensing that the opening goal is not far away. It takes until well into the second half for it to arrive, but when it does, the stadium erupts, as goalscorer Katlego Mashego spins away to celebrate in front of his adoring fans.

Again, it’s the noise, and the goal raises the decibel level to something almost incomprehensible, as the sea of black and white wave shirts, scarves and vuvuzelas above their heads start a celebratory chant that lasts all of about 15 minutes. It’s only cut short by a pesky Chiefs equaliser, but normal order is restored barely minutes later, as Mashego grabs the winner and carves his name into Soweto Derby history, as he dreams of the time he’ll be able to tell his grand-children about the day he scored the winner against Chiefs.

As the final whistle blows, it’s the jubilant Pirates fans who remain behind to milk every last second of a memorable Derby victory and contemplate the joys of the impending bragging rights for the next few months, until the next clash with Chiefs comes around.

The Soweto Derby is all about colour, passion and history and it seems to run deep, with fans from both teams unashamedly nailing their colours to the mast and taking pride in which side of Soweto their allegiance lies. But, ultimately, for me, it’s about the noise and that’s the enduring memory I’ll take with me, as I sit down in front of my sporting calendar and pencil myself in for the next Soweto Derby, later in the year.