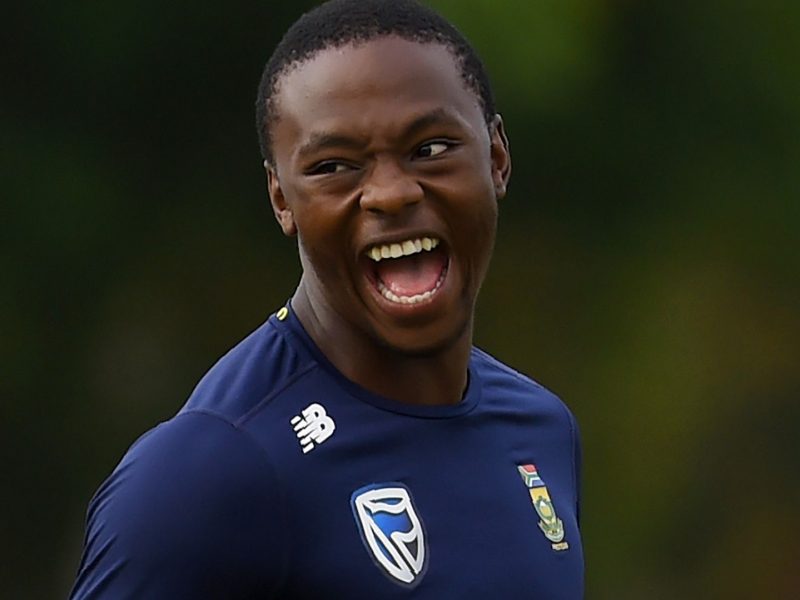 The Proteas fast bowler has opted to start his own agency, as opposed to just signing with one of the big players in the talent management space, obviously with the view that he’s better off with his own outfit.

Sure, it’s been done before, with the likes of tennis legend Roger Federer and basketball greats Michael Jordan and LeBron James all setting up their own shops.

But, it’s a pretty new concept for South African sport and the stars that inhabit the space in this country – particularly for an athlete still in his prime and with plenty of years left on the field of play.

Rabada, after all, is only 26-years-old and, assuming he steers clear of any career-ending injuries, probably has around another decade at the top of the game left.

It’s also a reminder that he’s in the prime years of his cricket career and we forget that he’s been in the national team set-up for nearly seven years, having first burst on the scene as a 19-year-old in 2014.

All of this begs the question – why go to the trouble of launching your own talent management agency, even with experienced partners who can do the heavy lifting, when now is the time to absolutely cash in on your currency and earning potential – not just locally – in the cricket space?

After all, Rabada is such a bankable South African sports property – with international appeal, including in the lucrative Indian market – that he surely would have been able to name his price or dictate terms with any of the agencies lining up to sign him.

Or is his view on the South African talent management agency space so dim that there wasn’t an outfit that appealed to him?

“The birth of KGR Sport and Entertainment was not a response to poor alternatives, but rather as a continuous evolution, to keep developing the way that athletes and artists are represented in South Africa and abroad,” says Ashley Kotzin, CEO of Forwardzone, who is Rabada’s partner on the project and will be providing the back-end support to the new agency, including in the areas of legal, financial, marketing and sales.

In addition, KGR Sport and Entertainment will start life with three execs in the areas of client management, digital and social media.

Kotzin says he’s known Rabada for some time now, with the two connecting in sporting circles, as Rabada emerged as a Proteas cricketer, whilst Forwardzone has been around since 1999 and provides a range of services to the sports industry, including talent management, consulting and activations.

So, I guess you could say that Rabada has found the right agency for him, but that the packaging of the proposition is different in that it is an athlete-branded proposition, with Rabada’s name attached to the new agency.

“As an athlete himself, he understands the critical value of having talent managers closely involved in their own brand and commercial opportunities – and through KGR Sport & Entertainment he is able to keep this focus sharp for his own brand, and for all the athletes and artists they represent,” says Kotzin, who refers to Rabada as “an innovator and incredibly sharp businessman”.

According to Kotzin, Rabada – who was previously represented by Openfield – approached him about setting up his own agency, rather than continue to be represented by another party.

That party, I’m guessing, could well have ended up being American sports management giant Roc Nation Sports, the global entity set up by artist JAY-Z, which of late has been making a serious play in the South African market, with a clear focus on signing the local industry’s biggest black sports stars.

HAVE YOU READ?: Nielsen – The Changing Value of Sponsorship

I would have thought that Rabada would have absolutely fit the Roc Nation Sports profile of what it is looking for in the South African market.

“As you can imagine, KG has had many offers from top local and international agencies looking to represent him,” says Kotzin. “However, in founding his own agency, he has given himself more direct input into his own commercial interests. In this way, he can use his own brand to pilot a talent-first focus, which will see other athletes and artists enjoy greater control, involvement and possibilities when they choose to partner with KGR Sports & Entertainment.”

And the global appeal of a Roc Nation Sports wasn’t attractive?

“KG is already well known on the international stage, and I see his decision to start his own agency as an investment into strengthening and growing his brand – and the brands of others – on a global scale,” says Kotzin.

Rabada’s currency is obviously in cricket, but will the new agency be looking at other sports in the short-term and will its scope be limited to sport? It’s well-documented that the Proteas fast bowler has an interest in music, and the fact that the official launch material from KGR Sports & Entertainment had more than one reference to “artists” would suggest that the new entity will be looking outside of the sports arena, as well.

“For now, we are not limiting ourselves to specific areas of the sports or entertainment industry, but rather more broadly, we are looking to identify and partner with athletes and artists who share our ambition, passion and focus on talent-centred value creation,” says Kotzin.

With this mind, what will the extent of Rabada’s involvement in the new agency be, given that he’s a touring professional cricketer in high demand – not only by the Proteas, but the likes of the Indian Premier League (IPL) and the other T20 leagues that have popped up around the world.

“Right now, KG’s primary focus remains on his cricket, ensuring that he continues to deliver his best performances on the playing field,” says Kotzin. “Away from the field, he will be involved in his own brand and commercial efforts, as well as act as an advisor to the KGR team. The day-to-day operations of KGR Sport & Entertainment is managed by a team of experienced creative and commercial professionals, which KG himself was instrumental in assembling.”

“He knows the importance of having a great team of professionals and then trusting them to do the job – it’s the same trust that is placed in him when he has a cricket ball in his hands. He knows how to get the job done, and so do the team around him”.

Tellingly, Rabada’s move is also clearly one that he feels will safeguard his future, which itself should be applauded, as South African sports history is littered with examples of former players who have found themselves down on their luck, post-playing career, having not fully maximized their time – from a commercial and contacts point of view – at the top, nor planned sufficiently for the day when they were past their best.

“KG understands that life is a long-term adventure and that his career as a professional cricketer is just a chapter in that story,” says Kotzin. “As a professional athlete, KG knows he needs to maximize his professional playing career while also ensuring that he builds for the future. In the short-term, he needs to leverage his talent, reach and skills to grow his professional earnings, but in the long-term he needs to build a brand and career that extends beyond the playing field. In creating KGR Sport & Entertainment, he has invested in both the short and long-term of his own brand and business interests”.