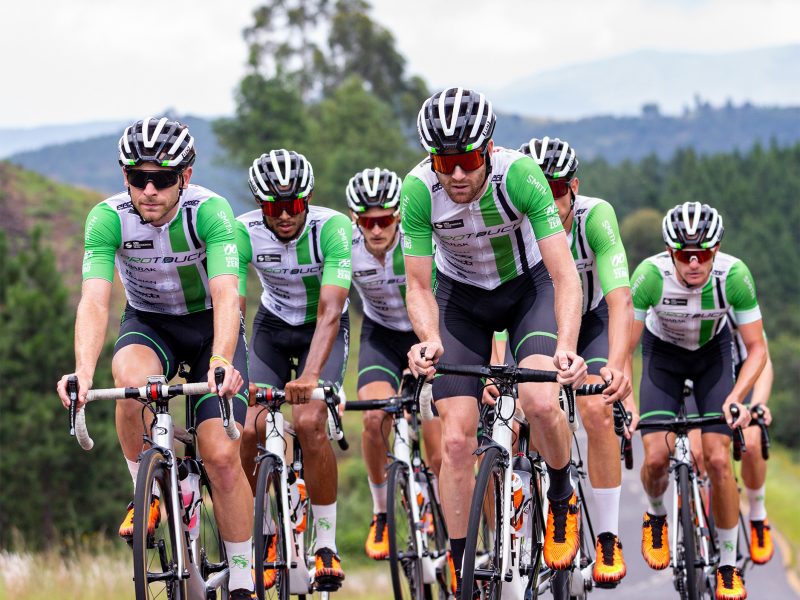 A South African professional cycling team is looking to use technology and a broader continental view, in a bid to build a stronger commercial base and more interest in the sport across Africa.

For those with just a passing interest in cycling, the sport is all about the Tour de France.

And, in some way, perhaps it is.

It’s the pinnacle of the sport and international cycling’s premier multi-stage event, with three weeks, every July, of gruelling pedalling and astute team tactics that usually spit out cycling’s top performer – a rather tired man, but one who ultimately gets to stand on a podium on the Champs-Élysées in Paris with the coveted yellow jersey on his back.

Not only that, but he can add his name to the list of cycling legends who can call themselves a ‘Tour de France winner’.

But, if those men represent the legends of their sport and that is the pinnacle of cycling, then where did they start and what journey did they take? I’m sure the routes to the top are varied, but I’m also interested in what journey a modern-day promising cyclist might take, and specifically to the structure of the sport, what currently lies beneath and what the ‘feeder’ system is that props up the elite level and ensures that there is a pipeline of cycling talent coming through consistently?

Well, for starters, international professional cycling at the top currently looks like this.

Firstly, there’s the 19 UCI WorldTeams, of which South African-registered Team Qhubeka Nexthash is one, and those are the big-name outfits you see battling it out at the Tour de France, along with a couple of teams from the second tier UCI ProTeams.

There are also currently 19 teams in that second tier, with four of them selected to compete in this year’s Tour de France.

Then there’s the third tier, the UCI Continental Teams, of which there are 162 outfits, four of them African, spread across five continents.

It’s important to have this background, context, and UCI (Union Cycliste Internationale) structure as a reference point, as it’s here in this third tier that we find the subject of this piece.

South African team PROTOUCH started life in 2016, when several promising under-23 riders found themselves without teams and little in the way of financial backing.

“South Africa has no UCI events other than its National Championships in road cycling,” says Rebecca Eliot, Impact Investment Officer and Chief Networker of PROTOUCH AFRICA, which is an African sports tech business that is focused on “engaging and monetising the African cycling fan enthusiast”. It is also the principal sponsor and owner of the cycling team.

“Event organisers here focus on mass participation races only and there is no focus on professional racing and the development of younger riders to compete at this level,” says Eliot. “Teams survive season at a time and build no brand equity. They call their team their sponsor’s name and when the sponsor falls away, they start again.”

So, a self-funded team was set up to cater for this young South African road cycling talent, and the goal was simple: “to enable South African riders to perform”.

And perform they did.

In its first three years, PROTOUCH got stronger and stronger, culminating in overall victory at the 2018 SA Road Cycling Series, amongst other impressive results. Seven PROTOUCH riders were selected for South African national team duty that year and the team achieved four podium finishes in Africa’s toughest stage race – the Tour du Rwanda.

Cue the next phase of development, as it became clear that focusing solely on South African racing was not preparing PROTOUCH’s riders for international racing.

In 2019, PROTOUCH registered a Continental Elite road cycling team – PROTOUCHPRO CYCLING TEAM – using a core of South African riders, with the goal of becoming the number one-ranked team in Africa.

That saw the ante upped significantly, with PROTOUCH now racing alongside top African, Asian, American and European Continental and Pro Continental teams, which made that African goal instantly achievable.

HAVE YOU READ?: Opinion: Social Viewing and Its Benefits for OTT

According to Eliot, it’s to not only continue getting good results on the road, but also grow the sport of cycling throughout the African continent, which, she believes will place the team on a more stable commercial footing.

“African cycling has a much bigger global audience and reach, and we believe we can make this attractive to global brands,” says Eliot. “South African brands are not investing in cycling in South Africa right now.”

Further strengthening that assertion is the fact that cycling in the rest of Africa is, arguably, a bigger sport than, perhaps, the average South African sports fan realises.

According to Eliot, that’s down to the historic European influence on Africa, although it was only in 2015 when the continent had its first two black Africans – in the form of Eritrea’s Merhawi Kudus and Daniel Teklehaimanot – starting the Tour de France.

Team Qhubeka NextHash’s Nic Dlamini became the first black South Africa to ride the Tour de France this year, and he was joined on the start line by compatriots Stefan de Bod, riding for Astana – Premier Tech, and Louis Meintjes of the Intermarché–Wanty–Gobert Matériaux team.

In terms of strong African cycling countries, it’s widely accepted that Eritrea, Ethiopia, Algeria and Rwanda lead the way, along with South Africa, but clearly there is much work to do, to get to a point where there is greater African representation at the very top of world cycling, and Eliot believes the PROTOUCH approach is a step in the right direction.

And she has some support in this regard.

“With only two African riders on the start list of the 2019 and 2020 Tour de France and three in 2021, investing in this dream could not have come at a more opportune time in African Cycling,” said renowned cycling commentator Phil Liggett, who has strong ties to South Africa and who’s foundation is supported by PROTOUCH.

Whilst the PROTOUCH team is registered in South Africa and is made up of a core of South African riders, the plan, according to Eliot, is to broaden this to include top performing riders from other African countries, as PROTOUCH looks to become a “truly pan-African team”. Three Ethiopian riders were signed in 2019 and 2020, and PROTOUCH recently signed the top-ranked Rwandan rider Moise Mugisha.

“We believe that we have created a platform to enable African cyclists to perform at a Continental level and to grow this into a pan-African pro team in the future,” says Eliot. “This is where we believe the biggest commercial prospects will come from.”

That includes leveraging the broader PROTOUCH AFRICA brand, outside of the cycling team itself, into other areas, including content aggregation, with Eliot of the belief that an opportunity exists for someone to ‘own’ the African cycling space, in terms of a central platform for all African cycling content.

“Our intent is to aggregate the following of over a million unique social media followers of African riders already in World, Pro and Continental Teams and racing at international levels,” she says. “These riders are currently being onboarded as PROTOUCH AFRICA ambassadors. There are just over 120 of them from various African nations and they already have fans who follow them on the world stage.”

The ideas is that these ambassadors will draw these followers to the PROTOUCH AFRICA platform and once this community is created and the app downloaded, content and news will be used to engage with this audience.

“Our focus is on getting more African riders onto the world stage and leveraging the following of over 1.5 million fans that follow African cyclists already on the world stage,” says Eliot.

Eliot has struck up a partnership with Swiss-based sports tech agency Blocksport, and in August last year took on an African Business Development role with the agency, which “provides teams, streamers, influencers, federations and leagues with their own branded and fully managed fan engagement mobile app platform.”

Eliot is taking Blocksport into various sporting codes in Africa, with the first edition focused on African road cycling.

“So, investors have the opportunity to unlock value through this community – business networking, marketing of products and services etc – and the margins available to us on transactions via the platform from brands that support African cycling,” says Eliot. “The return on investment we are offering is directly linked to this community.”

But, she concedes it won’t be easy, with cycling facing funding challenges not just here in Africa, but globally.

“I think that the model is broken all over the world,” says Eliot. “Look how many teams struggled towards the end of last year to finalise sponsorships. I think that the model that works is one that contains a number of revenue drivers – broadcast rights, merchandise, ticketing, fantasy games, an athlete agency, and other sports vertical revenue streams.”

And the ultimate PROTOUCH end game?

“There is a lot of raw talent in Africa and we want to provide the best performing athletes with the opportunity to migrate onto the world stage.”