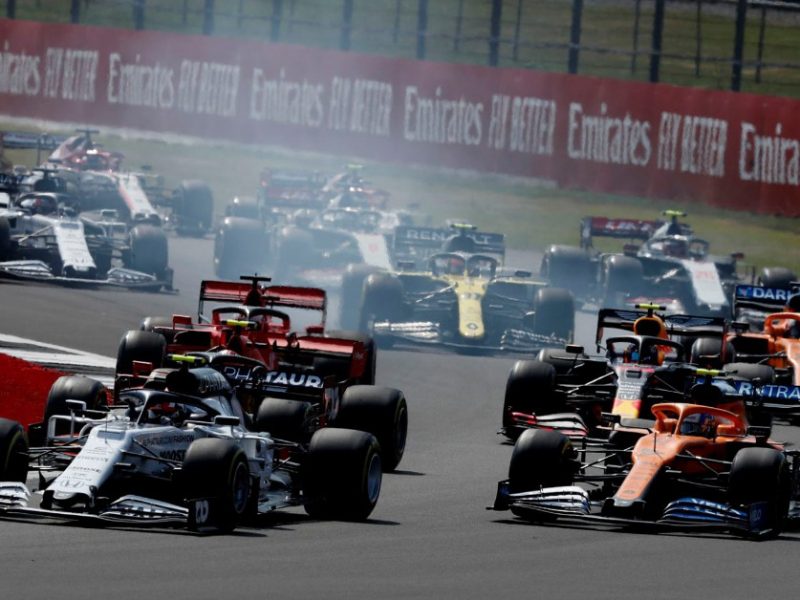 How F1 is Using AI to Plan Trackside Sponsorship Inventory

The 2017 Singapore Grand Prix was a great success for title sponsor Singapore Airlines.

In a dramatic start to the race, the Ferraris of Sebastian Vettel and Kimi Raikkonen converged on the Red Bull of Max Verstappen in the sprint to the first corner. As Verstappen and Raikkonen’s cars began to slide off the track, gathering the McLaren of Fernando Alonso in the ensuing collision, the host broadcaster switched to an aerial camera that captured the moment three cars came to an uncontrolled stop directly above the airline’s giant blue and yellow trackside logo. Had the incident not been impossible to replicate, you might have said it had been choreographed: once all the drivers involved walked away unscathed, the clip was replayed repeatedly, delivering huge levels of exposure for the brand.

Formula 1’s Senior Analytics Manager Max Métral says the accident highlights the difficulties the motorsport faces in providing all of its global sponsors with consistent levels of trackside visibility. Where other sports like football rarely diverge from showing pitchside inventory in a small number of predictable camera shots, no Formula 1 grand prix – even on the same circuit – is ever entirely the same.

Before each race, Métral’s team plans where to place trackside signage to keep each of Formula 1’s commercial partners satisfied. But with the addition of new sponsor Aramco in 2021, as well as the disruption to the calendar caused by Covid-19, he wanted to bring a greater degree of control and insight to the process.

“With more partners, less races, more uncertainty, we needed to have a better tool in order to better forecast and [help] our analysts and the guys that put together the signage maps around the track,” Métral told SportBusiness. “We needed some tools based on previous data, previous years, in order to better forecast: if we want to ideally deliver ‘X’ amount of exposure for a partner, this is roughly where we should be positioning the [signage].”

To help sift through race coverage quickly and accurately, the motorsport commissioned specialist artificial intelligence company Flamingo AI to build up a database of the types and quantities of coverage devoted to each sponsor across the 2019 season. This then informed where to position signage during the 2020 season. A further study across the course of the 2020 season means Formula 1 now has two years of data to help plan signage across the 2021 season.

The study built on a pre-existing relationship between the two organisations under which Flamingo had conducted an analysis of social media sentiment towards the motorsport as it took its first steps towards enhancing its digital output under new owners Liberty Media in 2018.

Lucas Galan, Head of Applied Data Science for Flamingo, explains how his company developed a bespoke machine learning tool to identify which cameras were active at any one time in a race and what logos those cameras were seeing. The firm then created a dedicated platform to enable Métral’s team to curate and interpret the data.

“It is a project that’s very close to my heart, because I think it’s a unique application of data science in the sense of managing data and creating data outcomes that are consumable by humans and enhance the way that humans can look at the world,” Galan says. “It’s also a unique challenge, because obviously logos are not static, we’re talking about a sport that plays at an incredibly fast pace, and to be able to train a machine to recognise the Rolex logo, as it’s zooming by at 200 miles per hour, had its own unique challenges.”

He explains how the AI tool split race coverage into half-second segments, gathering all of the relevant branding metadata for each of these clips. This information was then fed into the specially-developed interactive platform to allow Métral’s team to analyse specific segments and corners of race circuits.

HAVE YOU READ?: LaLiga Appoints T+W as Media and PR Agency

The motorsport’s approach is to provide each sponsor with a sequence of exclusive and independent corners to make sure their branding isn’t lost in any visual clutter. Rather than using the AI tool to cram more branding into each shot, Métral says the objective of the project was for Formula 1 to deliver sufficient amounts of screen time to each of its sponsors to satisfy contractual obligations.

“I wouldn’t say this was about squeezing [more branding into the coverage]; it was about optimising exposure,” he says. “Because the truth is, if you wanted to maximise exposure, you could attach a big logo across the screen for the duration of the feed and that’s not what we’re trying to do.”

He adds that Formula 1 wasn’t interested in using the tool to measure share of voice for each brand: “It’s more that we treat each partner as being independent and we have targets for each of them based on their needs, and their objectives. We don’t compare partners with each other.”

However, with Formula 1 initially resuming behind closed doors in 2020 and doubts persisting about whether it could complete a drastically reconfigured season, Métral’s team were eager to provide sponsors with additional, more integrated branding opportunities. When the sport restarted with a double-header of races at the Red Bull Ring in Austria, global sponsors including Heineken, Aramco and DHL were able to emblazon giant logos across specific empty stands, helping to offset lost hospitality and ticketing opportunities.

Galan says the jointly-developed research tool is distinct from the sort of brand reach or impact analyses carried out by companies like Nielsen or Kantar Media, because it was created as a bespoke platform to deal with the specific task of creating better track signage plans.

“What’s interesting here is that there is a pile of data from Formula 1, and a number of business questions that they wanted to answer,” he says. “Every element of this project is tailored to those specific track-building questions where we’re being very surgical about every element of a corner, including the make-up of cameras – is this a camera looking towards the inside of the corner? What does the signage look like? And then we round it all up and are able to create macro views of how attractive [it] is going to look. And then [that] obviously adds predictability for the future to say, ‘this is what’s likely to happen if you change these cameras’.”

In the first instance, the programme was trained to ignore branding on cars, but Métral agrees that it could be reconfigured to help the commercial strategies of teams competing in Formula 1.

“I’m sure the teams would be interested – maybe with a different angle,” he says. “They may be more looking at how to optimise the branding on their cars. All these questions are slightly different to what we’re asking, as we are more focused on the track. “They know we’re doing this project. Maybe in subsequent years and iterations of the model that could be something we could explore.”

Galan also believes the technology could be applied to other sports which offer the same unpredictability as the example from the Singapore Grand Prix.

“This is applicable to everything from wrestling to Nascar,” he says. “We’re looking for those marginal gains, for technology to give you those analytics that help you project into the future. I think that’s where it gets very exciting.”