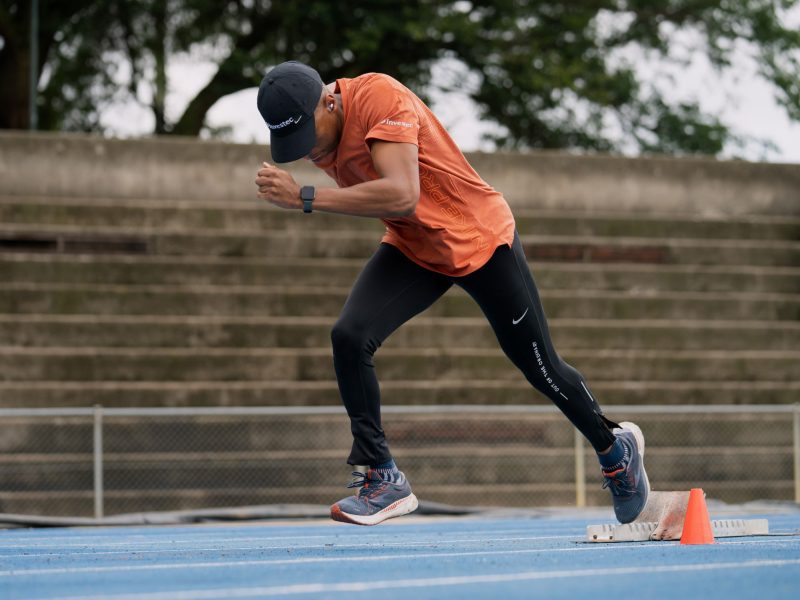 Already employed within the Investec Group Sustainability team, Mhlongo is on track to represent South Africa at the Paris 2024 Paralympic Games in the long jump, 100 metres and 200 metres.

“It is an honour to sponsor such a passionate, patriotic, talented and determined athlete,” says Peta Dixon, Investec South Africa’s Head of Sponsorships. “He embodies the Investec culture through and through, and is wholeheartedly committed to achieving his maximum, while improving the lives of those in similar situations to his own. It is our aim to assist him wherever needed, because he certainly is one out of the ordinary individual!”

While in utero, Mhlongo was diagnosed with Amniotic Band Syndrome, a syndrome that limits blood flow to certain limb parts, restricting their growth.

“In my case, there were amniotic bands that constricted my fingers, as well as my mid to lower right shin,” says Mhlongo. “These bands cut off all my toes on my right foot and also started cutting into my right leg. I think I was three months old when I had my first surgery and spent a large part of my first six years in and out of hospitals.”

Having matriculated from Kearsney College with seven distinctions, the multiple world record holder joked that he thought Investec was playing a trick on him when approached for the sponsorship.

“I am still in disbelief and feel like I’m riding the crest of a wave,” he says. “The culture, the people and the importance that Investec places on the value of their people and their lives is what drew me to work for the organisation some time back. When the sponsorships team approached me and offered their support on the road ahead, it provided further testament to the fact that Investec truly is 100% behind their staff in every single way, and always looking for opportunities to support them. Investec is a brand that believes in enjoying your journey and empowering where possible. It is not about medals and records alone. I am grateful for the ongoing support, shall strive to make the organisation proud, and look forward to a powerful relationship on the field and off it.”

The World Games gold medalist and double World Championship medalist, who trains up to six hours a day, is also involved in a number of non-profit organisations, including The Chaeli Campaign, Steps Clubfoot South Africa, and Jumping Kids.