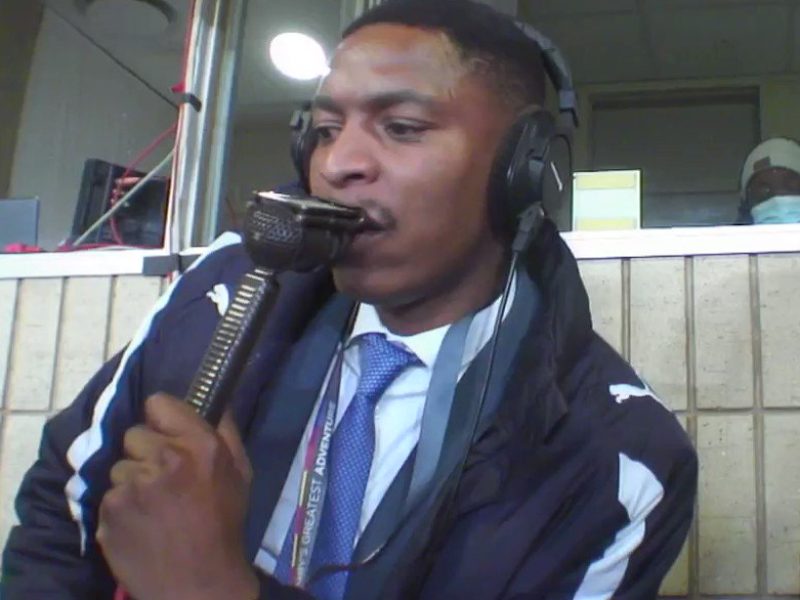 Masomelele Jucwa is celebrating being named the first ever winner of the Pendoring Commentator Award at the Hollard Sport Industry Awards.

The SuperSport Xhosa rugby commentator picked up the inaugural award at a virtual event on the 25th of November.

“It means so much to me, because a few years ago when I was down and out, I was on the verge of giving up on my dream of being a commentator and just going back home,” said Jucwa. “To win this award after just four years of doing commentary, truly is something special to me.”

The Pendoring Commentator Award is a new addition to the annual Hollard Sport Industry Awards and celebrates the richness of South Africa’s indigenous languages. It “recognises and pays tribute to those sports commentators who bring passion and excitement to the game, those who make the best calls, and those whose emotive anecdotes continually inspire and engage.”

“It’s a great creation, because it’s always beautiful seeing indigenous languages being celebrated,” said Jucwa. “It’s important that there is such an award to motivate all commentators in indigenous commentary to strive to achieve more.”

Jucwa held off the challenge of fellow commentators and nominees Maphale Moloi and Reginald Ndlovu a.k.a Mapentsela to be named the inaugural winner in this category.

As he said, Jucwa has been commentating for just four years, having got his lucky break in 2017 when he was discovered by SuperSport in a commentator search competition.

“It changed my life, because it brought me closer to the game,” he told SuperSport colleague and fellow rugby presenter Elma Smit in an interview in 2018. “I’ve always being passionate about rugby, but I’m now part of the movement and part of the game.”

“SuperSport has a new wave of emerging talent and Masomelele is among this exciting group,” said Thato Monale, SuperSport Executive Producer. “He brings energy and vitality to his work, has a clear command of the language, and knows how to use it. This award is wonderful recognition for his expertise. He’s still young – just 30 – and we look forward to watching him grow and develop.”

Jucwa grew up in the rugby hotbed of the Eastern Cape and was schooled at Queens College in Queenstown, which has a rich rugby history and long roster of outstanding schoolboy rugby players, including the likes of Springboks Dick Muir, Robbi Kempson and Kaya Malotana. But his heroes are those who have come before him behind the microphone.

“The late, great Kaunda Ntunja, Bra Mthura Scott, Lonwabo Mtimka, Kaya Malotana and the English soccer commentator Peter Drury,” said Jucwa. “I’ve tried to model my commentary on all of them, because they each have – or had – a unique way of making sport come to life. But, I’d describe my commenting style as precise and keeping up with the game at all times. I try to mix it up as much as I can, so as not to sound repetitive.”

Before winning the commentator search competition, Jucwa was working as a sales agent at financial services group Liberty, but from the start felt at home in his new team at SuperSport, and now knows what makes for a good sports commentator.

“Love, passion and understanding of the sport,” he said. “The work that you put in before and after the game itself goes a long way in making a good commentator.”

The Hollard Sport Industry Awards once again celebrated the ‘teams behind the teams’ within the business of sport, covering areas such as sponsorship, marketing, PR, virtual events, advertising, community investment, social media, production and branding.

Mscsports was the big winner at the 2021 Hollard Sport Industry Awards, walking away with three awards, including the coveted Agency of the Year award.