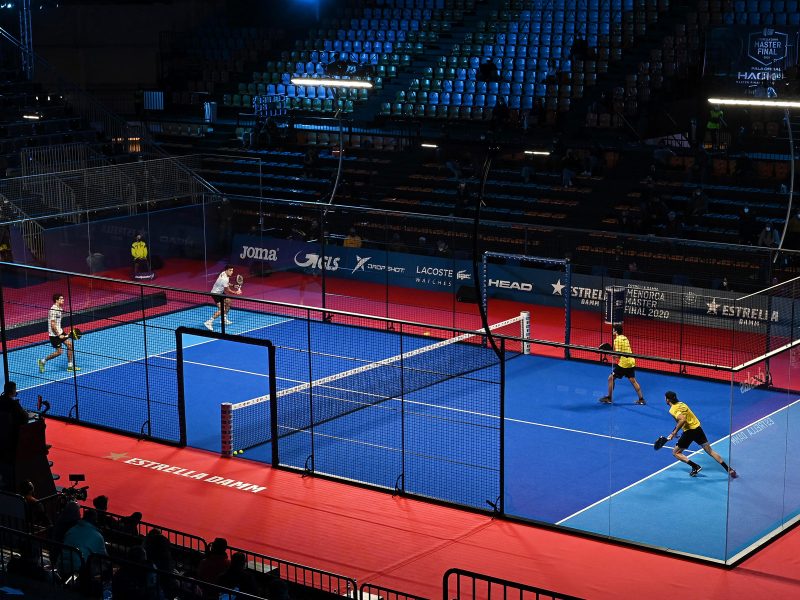 Catchy racquet sport seems to have caught fire in South Africa, thanks to low barriers to entry, an inviting social side, and a commercial model that might just work.

It’s called ‘Padel’, it’s a bit of a mix of tennis and squash, and for a couple of reasons it seems to be taking off in South Africa.

Chances are, if you know of someone affiliated to a sports club, you’ve heard about padel, and that same person has tried to talk you into trying it.

How is it played?

For the uninitiated, padel is played by four people on a court surrounded by glass walls and mesh fencing, with the court roughly half the size of a tennis court. The ‘gameplay’ is identical to tennis, with the key differences being the walls surrounding the court, which the ball can either be played into or off of.

Padel is easy to pick up and incredibly social, and because the game is played in a tightly enclosed space, it is fast and moves at pace, with matches normally finishing within an hour.

The Country Club Johannesburg was one of the first clubs in Gauteng to identify the appeal of padel and make a significant investment in it for its members, erecting three courts at its Auckland Park facility last year, with plans to add further courts at its Woodmead club in the near future.

“On average, our courts are busy 10 hours a day, per court, and whilst we’ve been blown away by the uptake, we’re also not surprised,” says General Manager, Steve Nicholson. “It’s just a fun racquet sport for the whole family, is very tactical, and power is not that important for your average player. In fact, it’s easy to play and we’ve seen people get addicted!”

Where is it played?

Padel is currently popular in countries like Spain, Sweden, Portugal, the UK, Argentina and Mexico – where Enrique Corcuera invented the sport in Acapulco in 1969 – and it seems to have the ability to really take off. In Sweden, for example, the first courts opened in 2014 and today there are well over 4,000, for a population of just 10 million.

“Racquet sports were a big thing growing up in South Africa in the 80s and 90s, and that generation first moved on to golf, then cycling, and I just think the timing is perfect for them to come back to a racquet sport that’s not that expensive,” says Paul Atkinson, a former SA top five-ranked squash player, as well as the co-founder and CEO of Padel 365, which is involved in padel club management, court building, and the importing of internationally-manufactured courts.

“I actually think it’s very similar to golf, in that you play with three friends, you have all that banter, but it’s done in an hour or so, and it’s even more personal,” he says. “It’s a blend between the social side of golf and cycling, but it’s not expensive to start the game and you’re not spending five or six hours away from family.”

HAVE YOU ALSO READ?: Sunshine Tour has ‘no dog’ in the LIV Golf fight

And according to Atkinson, because of how it’s started in South Africa, padel may just have a commercial model that could sustain the sport and put itself on a stronger financial footing than the country’s tennis and squash clubs.

“You’re looking at about R400/hour – R100 per person – for a court, and when I was researching padel for my squash club, I found there was a revenue opportunity to run it like a business,” says Atkinson, who adds that it costs approximately R1m-R1.5m to build one court. “With that in mind, you should be able to make your money back in about three years.”

No surprise, then, that there’s an explosion of new courts being built in South Africa, with Atkinson pointing to six in Sandton next to the Discovery building and a couple in and around Wanderers, along with courts in Killarney and Houghton, whilst new courts have just opened next to Pirates in Greenside – all of these in Johannesburg, alone.

Africa Padel and Epic Padel are two of the major players in the industry, with the former saying courts in Pretoria and Franschhoek are also on the cards, to go with their existing operational sites at the German Country Club in Jo’burg, in Plettenberg Bay, and in Camps Bay, Fish Hoek, Constantia and at the V&A Waterfront in Cape Town.

Epic Padel, meanwhile, are behind the new courts at Huddle Park in Linksfield, Johannesburg, and those in Pinehurst and Clifton in Cape Town.

As with any new sport, not a huge surprise that there’s a bit of jostling for position, in terms of setting up a regulating body, and here the South African Padel Association seems to have made the most progress, receiving associate membership from Tennis South Africa in 2021.

But SAPA President – and former Sharks Rugby centre – Rudi Keil – is quick to point out that the body has no desire to claim ownership of the sport.

“SAPA has got further down the road and we’re the most structured body, but we want more people involved and no-one should have a monopoly on the sport,” he says. “Hopefully, padel can navigate the political minefield of sport in South Africa and we can bring back community-based sport and a return to the days when our social lives revolved around the sports club.”

Keil’s other concern is that padel might be a bit elitist right now, booming only in upper income areas, but with little in the way of development seemingly on the cards. He would like to see that situation changed in the future, as the sport opens up and access to courts increases.

Wherever your allegiance lies, there’s no doubt that padel is here and it’s here to stay, in South Africa.

“Nobody really saw it coming, and it’s happened so fast,” says Atkinson. “It’s become one of those viral things, where everyone is talking about, so just about everyone wants to try it.”