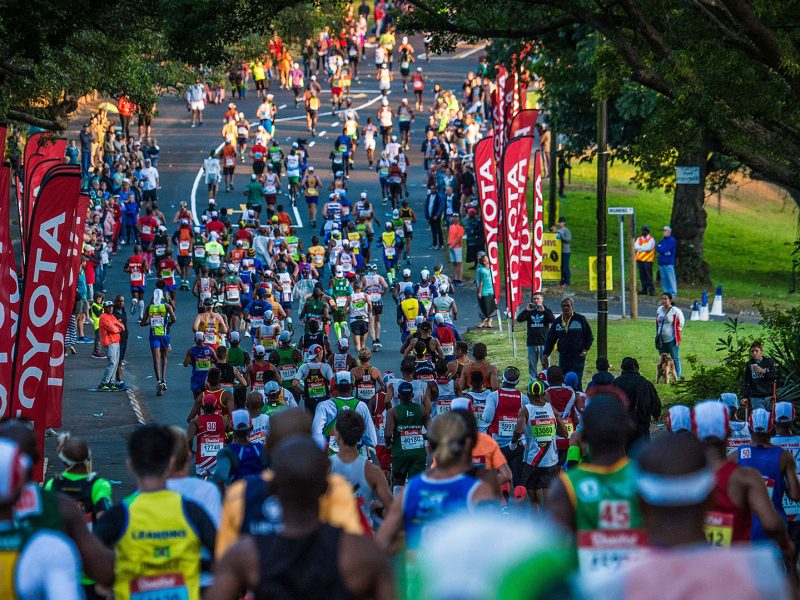 SA running in a state of flux, post-Covid-19

Global stats suggest running interest and uptake are up, in the wake of the Covid-19 pandemic, but local running authorities are not convinced – instead hoping for a big bounce in 2023.

On the 28th of August, around 15,000 runners (including this writer, for the first time – Ed) will line up in Pietermaritzburg and attempt the ‘Down Run’ of what’s billed as the ‘Ultimate Human Race’.

The Comrades Marathon – an iconic South African sporting event and a physical challenge that sits at the absolute limit of many who will attempt to get to Durban within the 12-hour time limit.

It’ll be the first Comrades in three years, due to Covid-19, and it’ll take place against the backdrop of a South African sports industry still recovering from the devastating effects of the global pandemic and its resulting lockdowns.

What’s intrigued me, though, has been the effect Covid-19 has had on the local running industry, in terms of participation numbers – not just due to my own anecdotal experience of witnessing South Africans bursting out of lockdown and flooding their closest parks and running routes – but also by a comment made by Athletics South Africa President James Moloi.

“Covid-19 somehow seemed to spur on people to worry more about their lack of health practices and they took to running and exercise to boost their immune systems,” said James Moloi, President of Athletics South Africa. “It seems people are generally afraid to die and many were even seen defying the national restrictions so that they could go for a jog or run.”

So, do the numbers back up that assertion?

Well, certainly, globally, that does seem the case, with research giant Nielsen Sports and World Athletics releasing the findings of a global study in April of last year, which revealed a greater uptake in recreational running during the Covid-19 pandemic, including an increase in regularity for existing runners.

The data was based on nearly 8,500 interviews collected across 10 countries, including South Africa, with 13% of all runners saying they had taken up the sport in the previous year (since April 2020), and the majority – 9% of all runners – saying that Covid-19 played at least some part in their decision. Further to that, 22% of all runners claimed to run more often than they did previously, as a result of the pandemic.

It seems the good folks at RunRepeat – the world’s largest online athletic shoe review company – seemingly agreed. Its research – also cited by World Athletics – revealed an even greater uptake, following interviews with nearly 4,000 runners, with 28.76% saying they took up running during the pandemic.

Interestingly, though, those ‘new-pandemic runners’ said they were 19.82% less likely to participate in in-person races over the next 12 months and were 115.37% more in favour of virtual races than pre-pandemic runners.

Which brings us to South Africa, where Bruce Fordyce, Comrades legend and CEO of parkrun SA, is not convinced that there’s been a boost in running numbers.

“No, I have no evidence to support the theory that there has been a resurgence in interest in running,” he says. “If anything, the evidence shows that numbers are down, attendances are down at road races, and our parkrun numbers have been devastated. They are slowly recovering, but many greatly-loved running events and parkruns are closed forever.”

HAVE YOU ALSO READ?: Padel shaking up racquet sports in SA

Fordyce’s comments surprised me, because I would have thought that if there was a greater uptake in running due to Covid-19 in South Africa, that that might have been backed up by an increase in parkrun numbers, due to the event’s five-kilometre distance and closer relationship with ‘starter’ runners.

“I believe people thought about their health for a while during the intense lockdown restrictions,” says Fordyce. “There was an incredible surge out into the outdoors when we were first released from our prisons (lockdown rules) and we were allowed to exercise outdoors for two hours a day. Since then, though, that initial surge has died away.”

Charging off to the other extreme, I wondered, then, if this trend would extend to the other end of the running scale – the ultra-marathon space, where, obviously, Comrades and the Two Oceans Marathon stand out on their own.

“For Comrades 2022, nope, the increased interest isn’t altogether there, as we are about 11,000 entries less than we normally get,” says Race Director Rowyn James. “However, our novice intake is still high and healthy at 28% of entries. So, yes, that part is indeed (new) increased interest.”

Two Oceans Race Director Debra Barnes confirms that this year’s race numbers were down, but cites a number of reasons – namely the late opening of entries (“due to the delay in getting the go-ahead from the City of Cape Town”), the cost of entry (“runners and South Africans in general had less money due to the pandemic”), vaccination or PCR tests at own cost, and fewer international entries.

Both Fordyce and James agree that South Africa’s runners have got over the novelty of the virtual running craze that took hold during lockdown.

“Yes, people became interested in running (although shorter distances), as they were frustrated with lockdown and being confined to their homes, and testament to that is the Comrades Virtual race that got 43,788 entrants in 2020,” says James. “In 2021 the virtual race wasn’t nearly as successful, with just over 13,000 entries, as people were tired of virtual races that had flooded the running market and rather wanted to return to the ‘real thing’.”

So, what does the future hold? Both Barnes and James are optimistic.

“Clubs have seen a decrease in membership, as runners have not purchased their annual club licences, due to no events taking place,” says Barnes. “But, this will likely change as the road running scene returns.”

“For 2022, I view the running market as one that is ‘cautiously optimistic’ in returning to play after Covid, as every single race in the country’s entry numbers are down this year compared to their hosted race in 2019. I forecast that in 2023, all races will be back to where they were in 2019,” says James.

For the local running scene, let’s hope that’s the case.