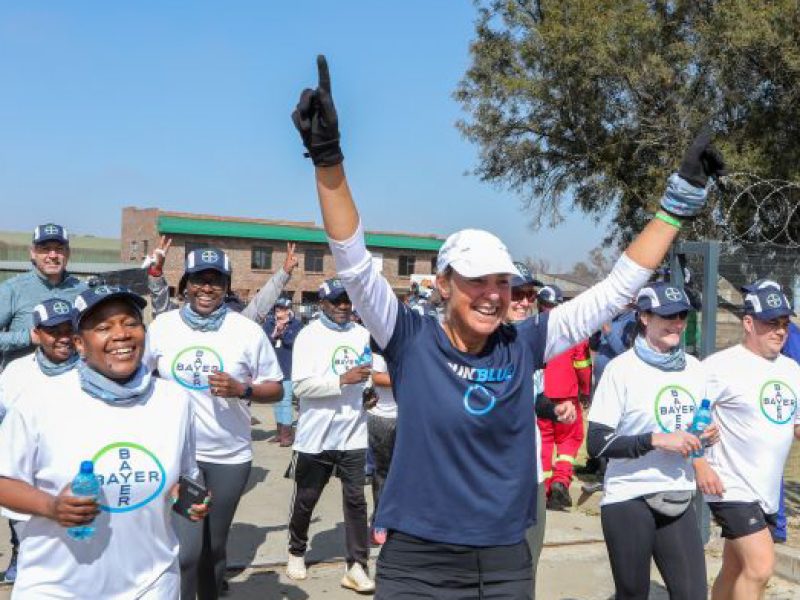 Water activist and ultra-marathon runner Mina Guli has arrived in South Africa to complete the Africa leg of the RUN BLUE campaign.

South Africa holds special significance for Guli as it was the country where she cemented her resolve to spend the rest of her life working to solve what she says is a global water crisis.

“Standing on the bank of the Orange River, I heard the pain in the voices of the farmers and park rangers who told me that as the river dried up, so did their incomes, livelihoods and futures. I was shocked – this is not only water they need, but water we need – for our food, our energy, and our planet. Right then, I decided that enough was enough – that I would dedicate the rest of my life to doing whatever was needed to solve this global water crisis,” says Guli.

Guli, the CEO of Thirst Foundation, a non-profit organisation focused on delivering ground-breaking action on water, is running 200 marathons this year to raise awareness of the water crisis, show the urgency of the problem we are facing, and to drive action to solve it. Action from companies, governments and from individuals. One of the goals of the RUN BLUE campaign is to gain commitments from 200 companies across the world to take concrete action on water in advance of the United Nations Summit on Water in March 2023.

Guli started her marathons on 22 March 2022 (World Water Day) at Uluru in her home country of Australia and has completed runs in Uzbekistan, Tajikistan, Kenya, Tanzania, Malawi, Zambia, Zimbabwe and Botswana.

Guli says that in South Africa she sees what the power of water can do to change people’s lives, from young farmers who told her “do I pray for rain or leave my farm?”, to children in Beaufort West skipping school to wait for water to be delivered.

HAVE YOU ALSO READ?: SA running in a state of flux, post-Covid-19

“Water. It’s at the heart of everything we do, we build, we eat and we use. Every. Single. Day. And yet everywhere we see the signs of this essential resource under stress,” says Guli.

While most of the people in positions of power live in places where water flows freely out of taps, and products can be purchased from the store, right now, one in three Africans feel the impact of water scarcity and 400 million people in Sub-Saharan Africa do not have access to basic drinking water. And the situation is getting worse – by 2025, close to 230 million Africans are forecast to face water scarcity and up to 460 million will be living in water-stressed areas.

Guli says that change is possible, but that this requires resilience, courage, and collaboration.

“I am in awe of the resilience shown by the people in these areas – their ability to adapt and survive in the face of these critical conditions is incredible. What’s missing is strong water leadership from governments and companies that will enable these communities to thrive. What we need is our leaders to have the same type of courage we have seen in the many water -stressed communities we’ve visited – the courage needed to act to solve this water crisis,” says Guli.

“We have an opportunity in the lead-up to the United Nations water summit next year to give voice to the voiceless – to lift the voices of the people on the frontlines of the water crisis across Africa and together as a community, not only to put water onto the global agenda, but to drive concrete commitments from companies, governments and from individuals to solve our global water crisis.”

“We need to make the invisible, visible. Only when water is front of mind, will we see the type of commitments the people of Africa and around the world need to solve these water problems,” says Guli.

Inspired by Bayer’s vision of Health for All, Hunger for None, Guli’s Thirst Foundation has partnered with the business for the RUN BLUE campaign.

“As a leader in health and nutrition, our products and services are designed to benefit people and improve their quality of life. Bayer is committed to making a positive contribution in society, and our holistic approach to addressing some of the most pressing challenges of our times includes a recognition of the importance of joining the global action on water. We are proud to partner with Mina and the Thirst Foundation to play our part in ensuring a water-secure future,” says Klaus Eckstein, Chief Executive Officer of Bayer South Africa.

Guli ran her first South African marathon on 25v July in Nigel, Gauteng with employees from Bayer joining her for her last five kilometres.